The debut novel by Le Xuan Khoa, “Falling Leaves in the city” published this summer has emerged as a phenomenon on Vietnamese literary circles. On June 29th, 2013 in Hanoi, its première entitled “The story of a generation” attracted quite a crowd. The novel immediately received high praises from literature lovers and critics. They appreciated his work not only for its contemporary, freshness but also for its spiritual depth. Only a week afterward, the book became the “hot” item to be hunted for, and got sold out very quickly in bookstores on Dinh Le Street, Hanoi. With the public’s warmly reception, Le Xuan Khoa was invited to introduce his book in Ho Chi Minh City on July 28th, 2013, with the event “A contemporary Hanoi“, and in another major city, Da Nang, on August 1st, 2013 with the event “The journey to find me“. Accompanying him on the trip is painter Jeet Zdung, his close friend, and the “donator” of many liberal and vivid illustrations found in the book. 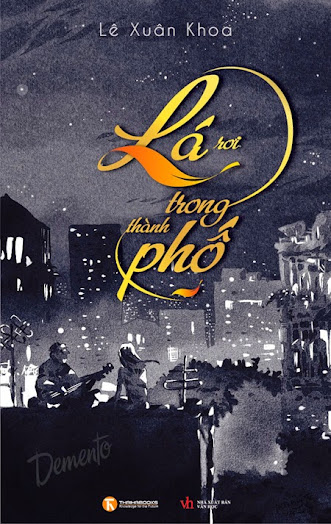 Only once in a blue moon that, in his debut, a young writer like Xuan Khoa could find an echo in the hearts of readers across the country.

“Falling leaves in the city” presents kaleidoscopic images of young people’s feelings, emotions, love, friendship, aspirations and glimpses into their soul abyss with a musical storyline that follows a unique, non-chronological order. The book not only gives readers an insight into Vietnamese young generations in the era of globalization, but also marks up some milestones in the development of the Internet community, the Pop movement and so on. Readers will also find themselves looking at the turning pages of Hanoi, the capital of culture, and its old-school-but-modern people, when helmets became compulsory for motorbike riders, or when the historical flood hit the city in 2008, and in the darkest time of the 2011 economic crisis pervading the whole country. 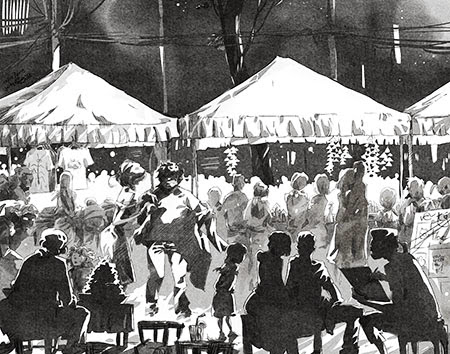 An illustration of Hanoi night market in the book

With a focus on the youth, the contemporary intellectuals living in a contemporary Hanoi, the book follows the footsteps of a young guy, whose nickname is Củ Đậu (Jicama), from his childhood to adulthood, since a little boy till an office guy. Without a thrill to its audience, the book consists of only workaday stories but these can reveal a tough introspective journey of the protagonist trying to find his value in life.

Using a not-so-fancy yet attractive writing style to portray his character’s mentality, Le Xuan Khoa “let loose” of them in the stories with no constrain, no direction as if they were actually real people and capable of finding their own way. But make no mistake, these “people” are no perfect models to be looked up to and admired, but Củ Đậu (Jicama), a regular guy, and his twenty-something-year-old friends, being carefree and confused about choices to make in life.

Those who are young or once young cannot help but smile when they suddenly find a reflection of themselves in the troubles, silliness, failure and success of the book’s characters. After a while, readers may feel like they were reading the chronicles of their own life. Together, readers and characters can take a strong, deep breath and continue to embark on the journey of their life – the journey of the leaves – as the author has confided “Leaves falling off a tree is a common act of life. As its title suggests, my book is but a story about common people in their normal life. And that is the life of so many young people in this dynamic Hanoi. In the rapid, constant transformation of the modern society, how do we know when to stop to see where we are heading next? Do you see the strong wind out there? I am a leaf, and so are you.” 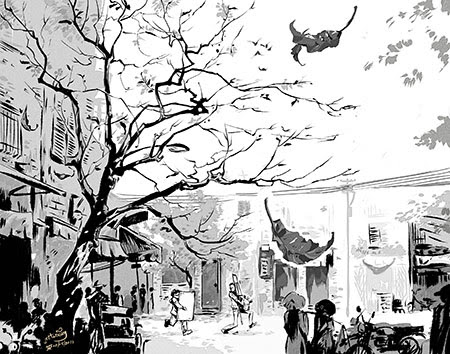 An illustration of the winter setting of Hanoi in the book

Despite his current job in the field of Creative Innovation and Community Development, Le Xuan Khoa is predestined with writing. He passed the entrance exam to the Nguyen Du School of Writing but did not enroll in. Back in his days at schools, he had been a familiar writer to some newspapers and magazines. In 2007, 2008, when blogging was introduced to Vietnam, with his blog – Demento – among the top ten most visited blogs, he earned his place in the early blogger community’s “hall of fame”. In reality, Demento – Xuan Khoa – appears to be a regular, unobtrusive guy, who likes being close to the nature, but with eyes that can see into the spiritual world in the middle of this everyday life.

Some feedbacks on the book “Falling leaves in the city”:

“Falling leaves in the city” created images of a generation of youth, of some office people, who seem to always rush somewhere in a hurry. They are not hasty but they live in fast pace, so fast that readers can easily get caught up in the rush, and even dazed by it sometimes. There is no big story in the book, but with its mere few hundreds of pages, a lot of things was told. Xuan Khoa’s literary style is very straightforward, undecorated. If you care about the generation, the book can grab you and take you away before you even notice.”

“The story recalls past memories…

The grownups should read this book to understand more about the youth, while young people will find themselves in there. With a start like “Falling leaves in the city”, I have faith that Khoa can reach “Kites flying over the field” – “the field” of seeders.”

“This book is an interesting sketch about the youth nowadays in the age of internet and globalization, with both positive and negative sides. But above all, it’s about deep-rooted human love.”

“The author is very certain with the way he writes. At first, the book appears to comprise unconnected pieces, but the more you read, the more you will get absorbed in the stories. Then, gradually, a vivid picture will come into your sight. His style is rich with Hanoi’s flavors, with mildness, humor, but underneath which lie his thoughtful rumination about a generation.

The writer has a charming and authentic way to describe people and scenery, while paying attention to polish little details. His characters live in a contemporary and realistic world. Not everyone will enjoy the book’s open ending in a mixed feelings of bright hope and lost and ambiguity. But isn’t that the way life is? In short, this is a good book, filled with new concepts and exploration in writing style. I am looking forward to seeing his next book.”

“I always like a complete ending where the lead characters finally achieve their goals and happiness. But maybe it is Khoa’s intention to leave a blank pause for readers when he wrap up his closely laid-out and connected plot with an open ending. What I am most impressed with Xuan Khoa’s book are the simplicity in its wording and the purity and innocent in its illustrations. These also seem to be the unchanged quality of its characters in the rises and falls of their life. Those who would browse through the book to see what happened next, would never see what happened, as all of its stories are so simple, so regular, so workaday. Reading this book should feel like listening to a Jazz composition of which the good lies in the regular but pensive details, like leaves calmly whirling in the wind.

“I am a reader in Sai Gon. I hadn’t heard anything about Le Xuan Khoa before then, and also rarely read any book by a young Vietnamese writer. About a week ago, I came across this book in a bookstore and who know what I was thinking when I bought it and read it overnight.

Unlike a common observation by some newspapers about the book, I don’t think that the book is “gentle” at all. The author must have had so much guts and “insanity” to dare tread into the thorny corners of the mind with such a calm and unflinching manner. What I found the scariest is that all tears and laughter were swallowed back in and sometimes ruthlessly blended.

The book reminds me of Hanoi and its small, quiet lanes shaded under rows of old trees, and its people who mean more than their words. Generally speaking, the writer was quite modest to say he was about to tell just one story. The book really gave me so much inspiration that I could not help but write this down after I had read the book the second time…”

“At last, I got my hands on this book. A book that is so easy to read yet so difficult to grasp all its metaphors. A story that appears so simple yet not simple at all. Unlike a painting by Bui Xuan Phai, The Hanoi depicted in this book is not all about the old quarter with aged, dilapidated houses, but also full of energy and dust from new buildings and skyscrapers being constructed every day.

The scenario where two lead characters, Củ Đậu (Jicama) and Hành Tây (Onion), met in a traffic jam, made me think about the distance between people in this age of socket science: one and one can be standing on two pavements of the same road but unable to reach each other because of the traffic that separates them.

Despite its tough theme, the book’s author does not tire out his readers with severity or grief. Amid their hardships, the characters always keep a spark of hope, of the desire to live and to love. Above all, it is the love of humanity that keeps them going. I love it.”