(http://vietnamnews.vn) Le Xuan Khoa has always been keen on literature and writing stories. He passed the entrance exam to Nguyen Du School of Writing but opted instead for Ha Noi University of Technology. However, writing has remained Khoa’s first love and he kept his passion alive with commentaries and analyses on his blog. Most significant, though, is his first novella entitled La Roi Trong Thanh Pho (Falling Leaves in the City), which is published in the form of an audio book, in serial form.

Born in 1983, Khoa is probably the first Vietnamese to have produced such an audio book. He wanted to do something new and different from traditional stories. He decided to read it on youtube and was surprised when the first chapters of Falling Leaves were warmly welcomed.

With his clear reading voice, Khoa has managed to make his story even more interesting, by modulating his tones and adding music associated with the main character Cu Dau, an inspirational addition. Dau has loved music since he was young and his life is portrayed like a song in which each of his acquaintances is a musical note.

Khoa has been meticulous in his choice of music for the book. “I wrote letters and asked musicians for their permission to use their music as a background. With people I know well, I ask them directly, and those I have never met, I call them and invite them for a cup of coffee, because my product is non-profitable,” he said.

Khoa’s audio book is literally home-made. “I bought a microphone and recorded my voice at home. At times it was too noisy and I had to move to my friend’s quiet room to record. I could not read at just any time. I would read one to three chapters each time then take a break for a while, mostly due to my busy work schedule, and partly because of my temperamental throat,” he said.

Khoa had to study vocal music and the software to make the audio book. “I don’t know vocal music but I have a good sense of tone. I understand rhythm and the melody and use them appropriately, so that my story arouses more feeling,” Khoa said.

“Audio book listeners are quite picky,” he said. “Many readers are impatient and have asked the author to create new chapters, which requires a lot of time and patience. The book has 30,000 viewers on youtube, not to mention links to facebook, blogs and other forums.”

“Your story is very beautiful”, says username Sahara Vuong on youtube, “It is very different from other stories. Even though I was not born in Ha Noi, I love the city and even love it more after hearing your story.”

Falling Leaves in the City is an imaginary story about the lives of young people who are living and working in Ha Noi. In this society, each person is like a leaf in a strong wind, all have their own demands for love, life and experiences, and meet a range of difficulties and conflicts. The story tells about the desire of youth to find balance and harmony in life.

“Many readers think it is my own life story, but it is actually inspired from my personal experience and that of my friends,” Khoa said. “The story aims to orient youth by conveying a message: each person has his own life values that need treasuring.”

The story, which is a mixture of past and present, reflects the life of youth from many angles, like the image of a young Hanoian in the floods of 2008, where the main character wades across the water to pick up his girlfriend, the relationship between them and the teachers and the difficulties of young tutors.

The tendency to become corrupted is told cleverly in the book. Dau loses his job and accidentally meets his first girlfriend again. During a night boozing with his friends, he uses a drug which helps him to escape his stuffy life. Next day, he once again feels suffocated with his own life. There is no comment or judgment but the soft voice of the storyteller.

Meanwile, Falling Leaves in the City consists of 42 chapters, 13 of which have been published on youtube. It continues to draw a lot of attention whenever its new chapter is released. Recently, Khoa has co-operated with the Thaihabook publishing house to release it in book form within in a few months. — VNS (June, 09 2013) 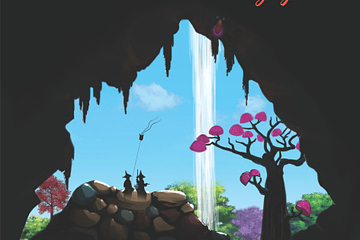